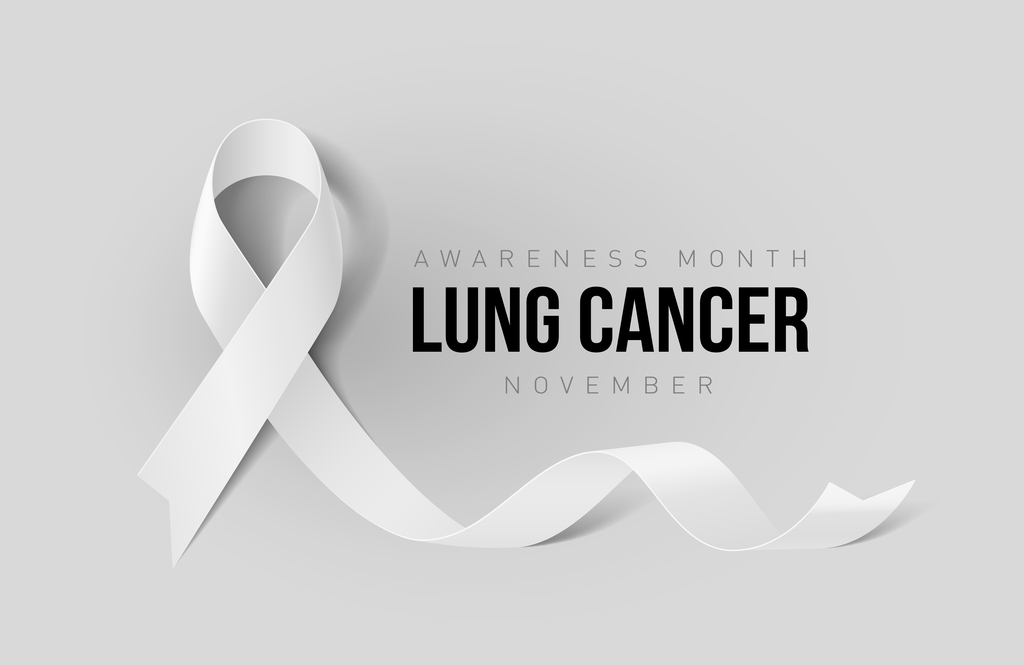 November is Lung Cancer Awareness Month! Did you know that anyone can have lung cancer? Unfortunately, the answer is yes. Since no one is safe and it is the most common cancer, it is especially important to spread awareness.

Even though 90% of cases are caused from smoking, there is still a chance an individual can get lung cancer. Secondhand smoke still contributes to the number of lung cancer cases and deaths. The American Lung Association states the second leading cause is exposure to radon, which is a naturally existing radioactive gas and individuals can be exposed if radon finds its way through small cracks in the foundation of buildings. Other hazardous substances that can cause lung caner is asbestos, arsenic, cadmium, chromium, nickel, some petroleum products, and uranium.

Tumors can grow at a rapid rate before an individual even notices any symptoms making it hard to catch the cancer at earlier stages. It is imperative you consult with a doctor, if you have any symptoms such as a lingering or worsening cough, coughing up phlegm or blood, chest pains when you breathe deeply, laugh or cough, or continuously have pneumonia or bronchitis. Other symptoms are hoarseness, lack of appetite and weight loss, shortness of breath, weakness and fatigue, and wheezing, Tumors can cause other issues depending on where the tumors form. Tumors found at the top of the lungs can affect facial nerves. Tumors found on lymph nodes can cause lumps, usually found in the neck and collarbone. Tumors can also press on the vein that moves blood between the head, arms and hear, which can cause swelling of the face, neck, upper chest, and arms.

If your doctor suspects there is something wrong and cancer is a possibility, you can expect a physical examination and testing to be done. Biopsies can determine if tumor cells are cancerous. There is treatment for almost all stages of lung cancer. Treatment is based on what stage the cancer is at.

The most common type of lung cancer is non-small cell lung cancer (NSCLC) and there are four main stages:

Stage 1: Cancer is found only in the lung. Surgery is usually done at this stage to remove a portion of the lung. Chemotherapy is an option if your doctor believes the chances are high enough for the cancer to come back.

Stage 2: Cancer has spread to nearby lymph nodes. Surgery is needed to remove part, or all of the lung and chemotherapy will probably be advised.

Stage 3: Cancer is continuing to spread and has reached to structures and organs. Treatment will probably consist a combination of chemotherapy, surgery, and radiation treatment.

Stage 4: Cancer has spread to the area around the lungs, or to distant organs. It is hard to cure at stage 4, but there are options available such as surgery, radiation, chemotherapy, targeted therapy, and immunotherapy.

Small-cell lung cancer (SCLC) has two main stages: limited and extensive stage. Limited stage is where cancer is found in only one lung or nearby lymph nodes on the same side of the chest. Extensive stage means cancer has spread throughout one lung, to the opposite lung, to lymph nodes on the other side, to fluid around the lung, bone marrow and other organs. The treatment options available are surgery, chemotherapy, and radiation therapy. However, this form of lung cancer grows and spreads faster than NSCLC and may not be successful.

In general, it is important to pay attention to your body and if you notice that something is wrong, it is best to consult your doctor. Lung cancer can be treated if detected early, so listen to your body and stay proactive.