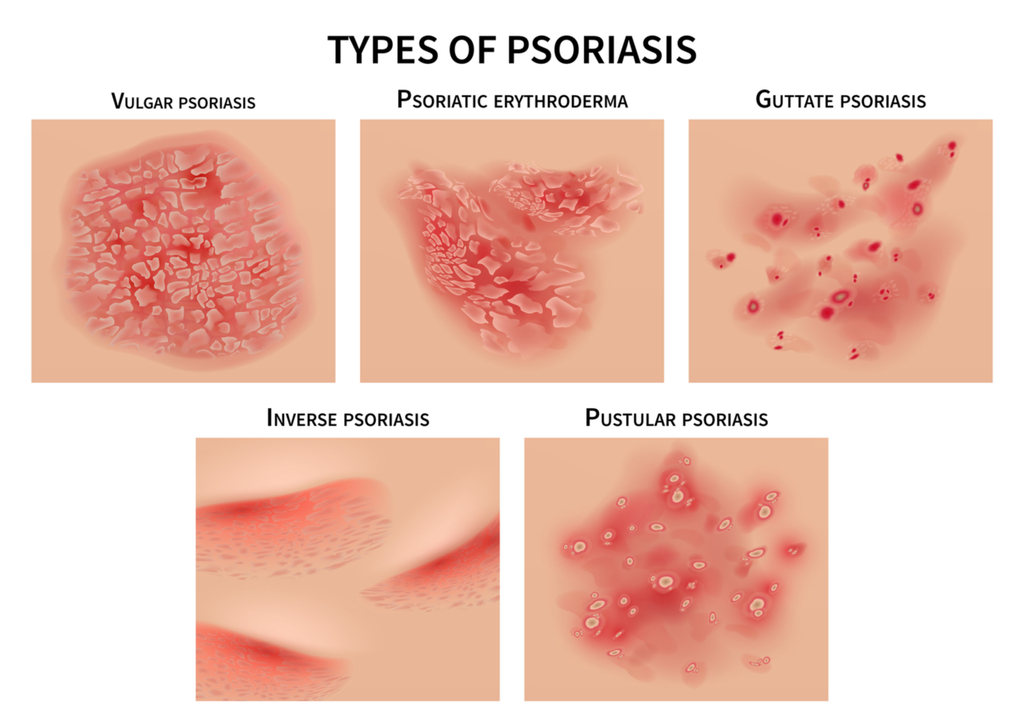 Since August is Psoriasis Awareness Month, it’s a great opportunity to take some time and learn about this disease, especially since it is fairly common. It is estimated by the CDC (Centers for Disease Control) that nearly 7.4 million Americans suffer from Psoriasis.

What are the different forms of Psoriasis?

Most individuals will be afflicted with one form of Psoriasis at a time, there are known treatments for Psoriasis, but currently there is no known cure. Occasionally, when one form of Psoriasis clears up and symptoms reside, another form may appear due to exposure to a trigger. Triggers include but are not limited to; skin injury, stress, certain medications, infections, weather, diet and allergies.

1. Plaque Psoriasis - Plaque Psoriasis is the most common type of Psoriasis; it can also be called ‘Psoriasis Vulgaris’. This type of Psoriasis appears as red, inflamed patches of skin covered with a white or silvery buildup of dead skin cells (known as plaque). It can cause the skin to feel painful to the touch and itchy and typically effects the knees, elbows, scalp or lower back, however … it can occur anywhere on the body.

2. Inverse Psoriasis – Inverse Psoriasis appears as areas od shiny, red and inflamed skin. This type of Psoriasis is typically located in the folds of the body; under the arm pits or breasts, behind the knees, around the groin or even the skin folds that surround the genitals.

4. Erythrodermic Psoriasis – This is one of the least common types of Psoriasis but it one of the most serious. More severe symptoms include severe burning, itching and peeling of the skin, changes in body temperature and a faster heart rate. If you believe you are suffering from this type of Psoriasis, see your doctor immediately, it can cause severe illness.

6. Psoriatic Arthritis – Psoriatic Arthritis is a variant of the condition where the individual has both arthritis (joint inflammation) and psoriasis. Typically, this condition appears years after the onset of Psoriasis symptoms. Symptoms can include; warm or discolored joints, swelling of the joints – fingers and toes, and stiff, painful joints that are worse after rest or in the mornings.

7. Nail Psoriasis – Nail Psoriasis is another variant of the condition and it more commonly affects those who are afflicted by Psoriatic Arthritis. Symptoms can include; painful, tender nails, color changes to the nails, a white chalk-like material under your nails, pitting of your nails, separation of the nail from the nail bed.

Living with Psoriasis can affect your quality of life; however, certain treatments are available. You can work with your doctor to develop a plan of care and guide you in figuring out what your environmental triggers are or other lifestyle factors. Triggers and lifestyle factors could be the culprit behind flare-ups. Help is available and there is hope! Stay safe and healthy Brevard!